How To Use This Safe Link Converter On Your Blog

The code has been copied to clipboard!

Click on the Copy the code to clipboard! button and put the code before the </body> of your blog.

Home Business Why Are Investors Turning Significantly Towards Solar Energy?

Why Are Investors Turning Significantly Towards Solar Energy? 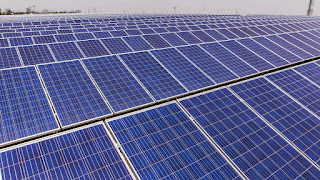 It is frequently heard about the anxiety of going green and developing an alternative source of energy not only to conserve it but also to fight against Global Warming. Galloping world prices have also been responsible for increasing the attention on finding renewable sources of energy.

Petrol prices have increased remarkably in the past few years and are expected to rise further and non-economical renewable resources are expected to become economical. Yet many of which are still underdeveloped due to its exorbitant prices.

Solar energy is one of the most extrusive alternative sources of energy. Numerous countries across the globe are toying with the idea of its development. Unfortunately, the share of solar energy in an overall sector is merely 0.1%. According to a survey, solar power has recorded a growth of up to 22% in the tenure of last 10 years, while 35% of its growth has been recorded in last 5 years alone.

With spectacular growth of this, there have been rising expectations that are replicating tremendous high valuations in the investment market. Investing in solar energy is one of the hottest trends these days as it is prospering and one of the best performing industries today. According to a solar research group:

Outspread and awareness about solar energy led many people in adapting solar resources. More buyers means more demand which in return increases the profit of solar energy corporations. Form an investor's point of view, investing in such energy guarantees higher returns and following other factors:

With a lack of equity in the marketplace and subsequent rise in commodity prices, the financial markets have become an even more volatile place to invest money. There is no doubt that huge profits can be made in commodity or any other sector, but the risks are far higher. Established investors will be hearing a lot more about solar energy as an investment vehicle in the coming years. Investing in solar businesses is becoming quite economical and has an attractive income stream. The backup of banking institution and support from government is making it a secured investment. Most importantly this also gives investors peace of mind for contributing towards the global need for energy independence from oil and a long-term security.